The baby shower yesterday went off very nicely and, after all the drama, it was a big relief that everyone seemed to have a good time.  It was hosted in an outdoor venue that has a lovely garden surrounding it which gives it a lush vibe.  Even though we’re in the middle of the Mediterranean summer, we thought it would be nice to sit outside as the shower was scheduled to run from 6pm.

Well it was nice, but it would have been even nicer if it hadn’t been so damned hot! Even at about 7pm the temperature was around 37 degrees (98F) and so we were all suffering a bit in the heat. It did cool down somewhat as the evening went on, but I didn’t really get my thermostat back until today when I spent the entire day in the office in air conditioning!

Sweating aside, it was a very relaxed occasion rather than the full-on baby showers I see on TV shows.  We had some gorgeous table decorations, some nice food platters to share, drinks (cocktails and prosecco for the non-pregnant guests), as well as some cute cake pops and cupcakes. The girls excelled with the gifts – this is one spoiled baby!  The got a few things off our gift list including this awesome activity gym from Skip Hop. I think I might be more excited about this than the baby is ever likely to be!

So while there was a LOT of drama around the organisation of the baby shower, on the day, it was lovely and relaxed and I think everyone had a good time.  Even my mother-in-law decided to come and she kindly settled the bill at the end which was very generous.

Here are some pics so you can see for yourself how lovely it was. 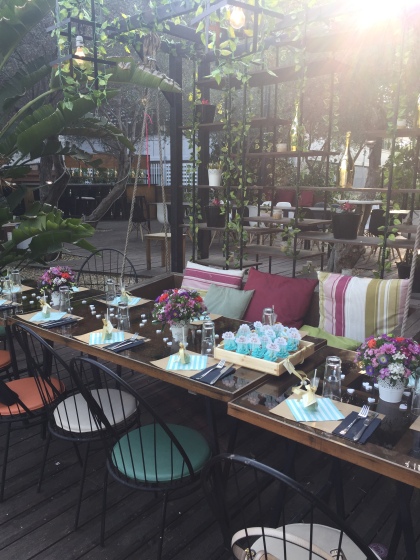 Another momentous milestone today was that this is the last Monday at work for me for all of 2017.  As someone who got her first job at 15 years old and has not been out of some kind of employment for longer than 6 weeks since (and that was when I moved countries), it is a very weird feeling to realise I’m not going to have a job to go to for many months. I am sure I will be working very hard though in the coming months, albeit a different kind of work.

Things are not going too smoothly with my maternity cover so I am a bit worried about that.  She has been working with me since the start of June but for the past three Mondays she has called in sick. I mean I understand if she’s not well but this is sounding suspicious now. I think she may be overwhelmed by the sheer scale of the learning she has to do to get up to date with my client and this is having an impact.  The only good takeaway from this is that I think I now recognise that I bring a lot of value to our team so maybe they’ll miss me a bit!  It’s easy to underestimate your contribution at work and this has been one of the pleasantly unexpected side-effects of preparing for maternity leave.

Otherwise, all is going well with the small one growing inside me.  I don’t think he’s in any hurry to come out as he’s sitting quite high up still.  I think if the plan wasn’t for a c-section I would be one of those women who are like 42 weeks pregnant.  Haha!  Maybe a c-section is not so bad after all.